Chukchi Sea next Gulf of Mexico? In 2010, when President Obama signed an executive waiver for BP to test new deep water drilling in the Gulf of Mexico, he was…

In 2 Degrees of Credendum, Cory Morningstar examines the history of climate catastrophe from fossil-fueled consumerism, and provides essential science debunking the ‘carbon budget’ hype from NGOs on the fossil-…

The thermodynamics of climate chaos, due to biomass energy imbalance, is the topic of a National Academy of Sciences paper. In ‘Human domination of the biosphere: Rapid discharge of the…

Coast Salish Nation, a kinship-based society of Washington tribes and British Columbia First Nations on the Salish Sea, announced on June 3, 2015 that they will seek a seat at…

The video documentary Bomb Trains dispels all doubts about this unacceptable hazard, and why it has become a growing threat to tribes and communities across North America. 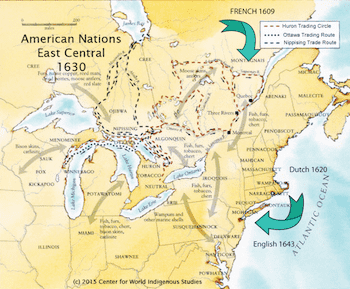 Nations Diplomacy in Wyandot, Anishinabek, Haudenosaunee, and Lenape 1630-1779 and Contemporary patterns of Nation and State Diplomacy Fourth World Nations are rapidly being pulled into international engagements while developing their…

Fossil fuel divestment targets only publicly traded stocks; but pension funds targeted by the 350 divestment campaign invest hundreds of billions in privately traded securities, such as hedge funds and…